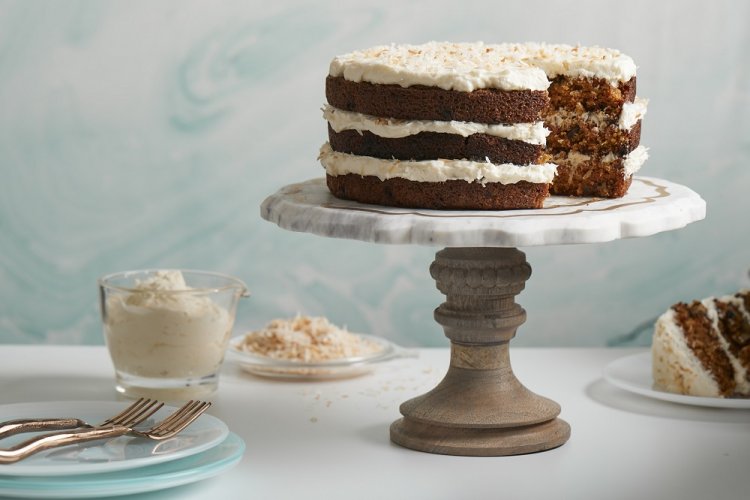 Three towering layers of moist, spice-filled cake and cream cheese frosting dotted with golden raisins, walnuts, flake coconut, and grated carrots is simply impossible to resist. Instead of completely frosting the sides of the cake, we give the cake a homespun look and let the beautiful, golden cake layers show. The top is frosted, and garnished with a little flair: flake coconut. We keep it simple and leave the coconut untoasted, but know you can toast the coconut, if you like

Note:
Use the medium-shredding blade for your food processor, to make quick work of grating the carrots. Otherwise, use the coarse holes on a box grater.

The frosted cake can be made up to 2 days in advance. Refrigerate until cold, then carefully cover with plastic wrap. The frosted cake also freezes well. Place it in the freezer unwrapped until both the frosting and the cake are firm and set, usually about 3 hours. Wrap the cake airtight in plastic wrap and then aluminum foil. Don’t freeze baked goods any longer than 30 days, as they pick up a stale-freezer taste. Thaw the cake, still wrapped, in the refrigerator overnight. The cake will keep for 3 to 4 days.